eSports in India and also in every other country is recognized and known closely, it has grown in India because of PUBG MOBILE, Counter-Strike, DOTA and other competitively played games.

As confirmed from the India’s most famous and skillful eSports organization, eSports is now an official degree!

In India eSports was not even a word used, later it rose when teams played DOTA, Counter-Strike tournaments. Recently it has got a boost because of a mobile game which is PUBG MOBILE probably the Messiah of gaming industry. The gaming industry is now bigger than movie and song industry clubbed together not only by numbers but also emotions.

The Staffordshire University announced the degree dedicated for gamers, BA Hons. and MA are those. In this growing stage of eSports it’s a compliment and also an answer to parent’s arguments. This is an opportunity for every person but playing competitively and playing for fun is different. This degree won’t launch any soon in India because of the current pandemic and also the mindset of Indian parents.

Job opportunities for many gamers will increase and now they can have their passion as their job! Jobs like game development, caster for tournaments, playing through official rosters from teams, coach, analyst,PR/Marketing executive, Journalist/content creator, Organisation owner/manager, Broadcast/production crew, developers, publishers, distribution etc. ESL is the best eSports production company, which is now trying to expand their business in India through CSGO and PUBG MOBILE. Due to this the degree of eSports will be a valid degree in India and also job opportunities might be available real soon. 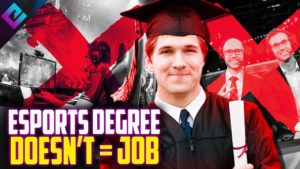 But recently Esports Talk a YouTube channel which reports updates about the eSports scene uploaded a video which says that only eSports degree doesn’t guarantee you a job other degrees might work for the post you’re trying to get. Like for example if you want to design logos for teams, jerseys for teams then Arts degree would be the best choice and probably eSports degree won’t matter.

eSports currently the most used word by gamers in India. Indian gamers are representing India in Global tournaments and World Leagues. Most played game in India competitively, PUBG MOBILE recently did the PMIS In-Game Qualifiers. Also PMPL the recent entertaining PUBG MOBILE tournament is running, and soon after the final match Top 2 teams will represent India in the PUBG MOBILE WORLD LEAGUE. CSGO most played PC Game competitively in India CSGO – SUMMER SEASON 2020 by ESL and Nodwin Gaming is casted by Indian caster Ocean Sharma (Gamingpro Ocean) which is going to be streamed on Hotstar! ESL and Nodwin Gaming are now expanding in Clash Of Clans and tournaments are going to be conducted in India soon.

Also read – How To Qualify PMIS 2020! EASY And EFFECTIVE TIPS!