Fearless and United – Guards is an upcoming online multiplayer action game being developed by Bengaluru-headquartered nCore Games. It is set to be released in November 2020.

The game was announced by Bollywood actor Akshay Kumar through his Twitter and Instagram accounts on 4 September 2020, and is expected to be available on Android and iOS.The promoters claimed that the intention of the game is to support Indian Prime Minister Narendra Modi’s Atma Nirbhar Movement. It was set to be launched by October 2020 but later the the game publisher announced through a tweet that the launch is pushed to November 2020, without providing any particular release date.

Akshay Kumar and Vishal Gondal, the promoter of the game, announced that 20% of the net revenue generated from the game would be donated to Bharat Ke Veer trust.

The announcement of the upcoming game came soon after the Chinese-produced PUBG Mobile game app was banned in India along with 117 more Chinese apps. There was widespread speculation that the game was intended as a replacement for PUBG for the India market and the idea came from a Chinese game. However, in a telephone interview, Gondal denied that the game was developed as a substitute for PUBG and said it is not a battle royale type of game like PUBG. 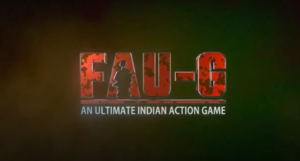 A month after it was announced, actor Akshay Kumar tweeted a teaser for Indian alternative to the banned PUBG called Fau-G, on the occasion of Vijaydashami. Pretty soon #FAUGteaser was trending on Twitter with plenty of opinions and memes on the new multiplayer battle royale game.

The teaser is based on Sino-Indian clash at Galwan Valley and shows army personnel from both sides engaged in a duel in which the Indian side emerges victorious. The clash between Indian and Chinese soldiers at Galwan Valley in June resulted in a ban on multiple Chinese apps, including TikTok and PUBG, by the Indian government.

The video, that is around a minute-long, shows the soldiers engaged in hand-to-hand combat and reveals nothing else about the game or gameplay.

“Today we celebrate the victory of good over evil, and what better day to celebrate our Fearless and United Guards, our FAU-G! On the auspicious occasion of Dussehra, presenting the #FAUG teaser,” the actor tweeted highlighting the Atmanirbhar initiative.

FAU-G the multiplayer action game, which was announced after the ban of popular Battle Royale game PUBG, has been confirmed to launch in November this year. The game is being developed by India’s mobile game publisher nCore Games and will be set in the Galwan Valley backdrop.

Akshay Kumar shared the teaser of the upcoming game on Sunday and noted, “Today we celebrate the victory of good over evil, and what better day to celebrate our Fearless and United Guards, our FAU-G! On the auspicious occasion of Dussehra, presenting the #FAUG teaser.”

The one-minute teaser gives a glimpse of FAU-G and shows Indian jawans fighting without weapons. It says ‘together we secure Bharat’ and ‘we are Fearless and United Guards’.

nCore also shared the teaser on its Twitter handle and confirmed that FAU-G will be launched in November 2020. But, the company hasn’t yet revealed the exact launch date.

The game will be made available on both Google Play Store and App Store and will be based on real scenarios encountered by the Indian Security Forces to deal with both domestic and foreign threats.

The 20 per cent of the net revenue generated from this game will be donated to ‘Bharat Ke Veer Trust’ that supports the families of India’s armed forces martyrs.