Instagram is launching a video-music remix feature to finally fight back against Chinese social rival TikTok. Instagram Reels lets you make 15-second video clips set to music and share them as Stories, with the potential to go viral on a new Top Reels section of Explore. Just like TikTok, users can soundtrack their Reels with a huge catalog of music, or borrow the audio from anyone else’s video to create a remix of their meme or joke.

Reels is launching soon on iOS and Android but is limited to just Brazil. Reels leverages all of Instagram’s most popular features to compete TikTok by rich features and community of 1.5 billion monthly users, including 122 million in the U.S., according to Sensor Tower. Instead of trying to start from scratch like Facebook’s Lasso, Instagram could cross-promote Reels heavily to its own billion users.

Instagram hasn’t guaranteed a U.S. rollout, to be clear. But it seems pretty likely that users in Brazil are going to enjoy the fun new video feature, which will also let you edit clips. For now though, at least if you live in the U.S., you’re going to have to stick with good old-fashioned Instagram Stories to get your video fix on the platform. 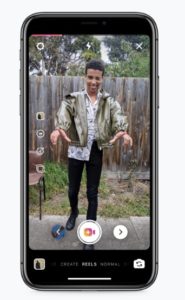 Users will find it in the Instagram Stories shutter modes tray next to Boomerang and Super-Zoom. They can either record with silence, borrow the audio of another video they find through hashtag search or Explore, or search a popular or trending song. Some audio snippets will even get their own pages showing off top videos made with them. Teaching users to poach audio for their remixes will be essential to getting Reels off the ground.

Once users are satisfied with their editing job, they can post their Reel to Stories or Close Friends, or message it to people. If shared publicly, it also will be eligible to appear in the Top Reels section of the Explore tab. Most cleverly, Instagram works around its own ephemerality by letting users add their Reels to their profile’s non-disappearing Highlights for a shot to show up on Explore even after their 24-hour story expires.

Will It Be Relevant In India?

Yes, most of the TikTok content creators had already transferred their audience to Instagram, guess they had a Deja Vu kind of thing with the app getting banned. Reel will have almost all the features, only personal sound tracks would be hard to use but everything else like the filters, hashtag trends will remain same! This can be an opportunity to the Actual Content Creators who chose TikTok as a platform to show their talency. Also Instagram is famous in India, the celebs often surf stuff and search for talent so actually talented people will be benefited and not the cringe content creators which was with TikTok! Instagram Reel is overall a good alternative for TikTok.