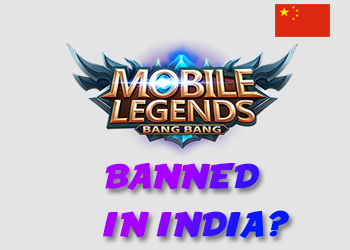 Recently, the trending hashtag #BoycottChina made the Government ban the harmful applications with Chinese origin.

Among the 59 Apps, Mobile Legends : Bang Bang, which is a mobile replica of the famous PC game DOTA, with 5v5 battle. This game is one of the most played game after PUBG MOBILE and Free Fire. To play this game strategic planning, teamwork and fast movement of fingers is required.

Mobile Legends: Bang Bang is developed and published by Shanghai Moonton Technology, a Chinese game developer. It was released for Android platforms on July 14, 2016, followed by an iOS release on November 9, 2016. (Courtesy : https://mmos.com)

By removing a game from the Playstore won’t help us much and also won’t get China lots of loss, rather people who had invested in the game would be at loss. Personally we don’t have any CONFIRM news about the removal of MLBB from Google Play Store or the Apple App Store.

Clash Of Kings is another game in the list, this game is also up. Some articles state these forwards are fake and there was no such messaging between GOI and Google Play Store or the Apple App Store, but some apps are getting removed because of the violence of the Section 69A.

Scroll back to top