ROG (Republic Of Gamers) is a sub-brand of Asus, ROG is well-known for gaming products mainly laptops/computer accessories but after the launch of the ROG Phone they’re now a recognised brand for Mobile Phones which are performance centric.

This phone is the most powerful flagship and has the latest processor and the best display! 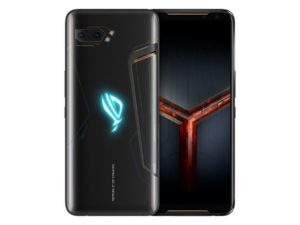 The massive 6.59 inches display is a 144Hz ultra-fast display with 1ms latency which makes the touch experience better and faster! Also the Snapdragon 865 Plus processor is the beast which keeps the 8GB RAM and 128GB storage alive with speed of the display! This is the only phone with the processor which has the power of having 3.1GHz processor, this processor also has Bluetooth 5.1 support. With this specifications packed phone the ROG cooling system is like a cherry on the top

The battery of 6000mAh can provide 9 Hours of gaming and the phone comes with a 30W super fast charger, the charging time can be optimised as per time by using the alarm in the ROG Phone 3! This feature is introduced so that the battery life doesn’t get destroyed. Also there’s another Type-C port at the landscaped bottom of the phone for charging while playing games so that fingers won’t get stiffed and there’d be ease while playing games with massive competition like PUBG Mobile and Fortnite.

The phone is a Gaming Phone so as other ROG devices have some extraordinary features which no one provides, one of which is the air triggers on the sides of the phone. These triggers can be set to any option in games, they can be used as the L1/R1 and L2/R2 buttons which are usually on the gamepads. They can also be used for joysticks as they claim the triggers also sense sliding. 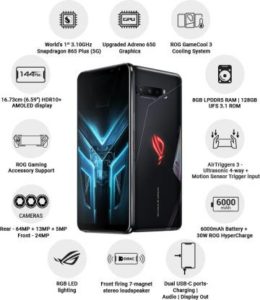 This device will be launched on 5th of August at 12 AM on Flipkart. The 8GB RAM + 128GB ROM variant costs ₹49,999. The pricing is pretty worth for the specifications and also the overpowered processor! This is a must-buy product for Mobile Gamers who are looking for a useable device for streaming.