About Raji : An Ancient Epic 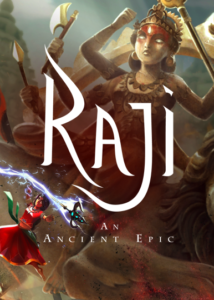 Raji: An Ancient Epic is the first game developed by Nodding Heads Games based in Pune, Maharashtra, India. The game was developed by a team of 13 people. A 6-person team at Nodding Heads Games began development on Raji: An Ancient Epic in January 2017. The developers cited Bastion and Journey as being major influences on the game, and God of War, Ico, Brothers: A Tale of Two Sons and Dark Souls as other influences. Nodding Heads Games attempted to secure funding for the game through Kickstarter with a funding goal of £120,000 in 2017. The campaign raised over £66,000 but fell short of its funding goal. A 20-minute demo of the game was made available as a free download on 8 November 2017 alongside the Kickstarter, and was also playable at the Indian Games Expo 2017 and the 2017 Nasscom Game Developer Conference.

Raji was included in the Square Enix Collective in October 2017. The game was developed for Microsoft Windows. Nodding Heads Games co-founder and lead designer Avichal Singh stated in November 2017 that they also planned to release the game on consoles. He stated that they had begun “the dev kit conversation” with Microsoft but had not yet approached Sony or Nintendo. He added, “It’s a matter of constraints we follow to make sure the game is running on these platforms because they have technical constraints. As long as they can keep to that we will be good. Unreal Engine 4 makes life a bit easier. You have direct porting options as well.”

Nodding Heads Games announced a partnership with game publisher Super.com in March 2019. The game was demoed at the annual India Game Developer Conference in Hyderabad, Telangana in October 2019. A new demo of the game was made available through Steam on 23 March 2020. An Xbox One demo of the game was released in July 2020 as part of the Xbox Summer Game Fest.

Is Raji The Best Indian Game?

Recently, the gaming community got a massive boost because of the newly launched multiplayer games, Fall Guys and Valorant. Also, the PUBG Mobile ban gave a boost to the PC Gaming Community as most of the Indian streamers and influencers moved on to PC games. The developers have distributed promotional copies to certain streamers, to be honest this is a good move to improve the Indian Gaming Community because after everything the streamers are the apparent influencers in the game and many people are liking the graphics and the mechanics of the game. Also this is a very unique yet informative concept in the face of a game because the is based on mythological concept and such conceptual games seem to be liked by most of the people looking at the success of God Of War and many more. The graphics are out of the world, like nobody being of Indian Origin have made such great graphics or they must’ve not published but now after this, they’ve certain chances to grow and publish such great games to take the Gaming Community to a next level.