WHAT IS DISCORD NITRO? 0 COST?

You can control every aspect of who can message you, nsfw image safety levels, and even what content is allowed in your server (with bots). Discord may not seem safe to you looking at what has happened or could happen, but that falls on you as a user.

Discord gained popularity with the alt-right due to the client’s supporting anonymity and privacy. Analyst Keegan Hankes from the Southern Poverty Law Center said “It’s pretty unavoidable to be a leader in this [alt-right] movement without participating in Discord”.

In early 2017, CEO Jason Citron stated Discord was aware of these groups and their servers.Citron stated that servers found to be engaged in illegal activities or violations of the terms of service would be shut down, but would not disclose any examples.

Following the violent events that occurred during the Unite the Right rally in Charlottesville, Virginia, on August 12, 2017, it was found that Discord had been used to plan and organize the white nationalist rally. This included participation by Richard Spencer and Andrew Anglin, high-level figures in the movement.

Discord responded by closing servers that supported the alt-right and far-right, and banning users who had participated. Discord’s executives condemned “white supremacy” and “neo-Nazism”, and said that these groups “are not welcome on Discord”.

Discord has worked with the Southern Poverty Law Center to identify hateful groups using Discord and ban those groups from the service. Since then, several neo-Nazi and alt-right servers have been shut down by Discord, including those operated by neo-Nazi terrorist group Atomwaffen Division, Nordic Resistance Movement, Iron March, and European Domas.

Such actions are against Discord’s terms of service and Discord has shut down servers and banned users identified from these servers, but the ease of creating new accounts and servers allows such servers to continue to proliferate.

In March 2019, the media collective Unicorn Riot published the contents of a Discord server used by several members of the white nationalist group Identity Evropa who were also members of the United States Armed Forces. (concern- wikipedia)

Check The First Part of Discord – What Is Discord?

Check The Second Part of Discord – How To Make Your Own Discord Server. 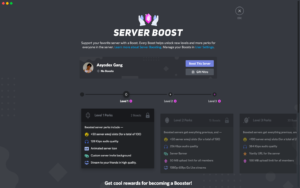 Discord Nitro is the premium subscription tier of Discord. It comes with global access to custom emojis from all the servers you’re part of, a custom Discord number tag, animated avatars, and server boosts. It costs $9.99 per month and $99.99 per year.

How does discord nitro work?
The new perk for Nitro users allows them to boost servers with various add-ons like extra emoji slots, higher audio quality, and other bonuses. Basically, improvements that all users in the server can enjoy. … Discord allows for users to connect on designated servers through text chat, voice chat, and even video chat.
Is it worth buying discord Nitro?
If you’re a creator or community leader who owns a server, Nitro is definitely worth it. The price of two server boosts costs as much as a monthly Nitro subscription, without the added benefits and 30 percent discount on future boosts.
What is nitro boost discord?
Nitro Boost is a new product, as of 2019, that provides Discord users a wealth of extra capabilities and increased access to content like games. Boost members can also vote for a server to get additional features. The company’s information about Nitro Boost is here.
What can you do with Nitro?
Nitro Classic will bestow upon you the following perks: Upload a Gif Avatar: Nitro Classic will let you add some animation-y goodness to your profile picture. You can turn your still life avatar into a cool moving GIF, and it’ll show up and do its magic tricks in text channels and all of your friend’s servers.
Is there a discord Nitro free trial?
If you are not a current or previous Discord Subscriber, the Trial Offer entitles you to access Discord Nitro – a Nitro Subscription, as defined in the Discord Terms of Service — for an initial three (3) month trial period (the “Trial Period”) without charge from the day that you activate the Free Trial Period .
Can you gift Nitro?
Nitro Gifting is here! You can now gift monthly & yearly subscriptions of Nitro & Nitro Classic. You‘re also going to want a convenient & easy way to share & manage these gifts, so we built that too! To start, head into your User Settings > Discord Nitro.
Do you keep discord Nitro Games forever?
Games you bought through the retired Store tab or through server commerce aren’t going away. The removal of the Nitro games library only applies to games you downloaded through the Nitro library. If you purchased a game on Discord, be it through our old Store or through a developer’s server, that game is yours forever.

Also Read – Get ROLLERCOASTER TYCOON 3 For 0$?!